About the author, and how Mozart came about.

David Webber BSc PhD CPhys FInstP is a mathematician, theoretical physicist, and software designer by profession, but inside there is a saxophone player and arranger desperately trying to get out.

Wolfgang Amadeus Mozart was a cool experimenter with the newest technology of his time, the clarinet. His clarinet concerto is arguably the greatest work for the instrument - at least until Barney Bigard came up with the solo on Mood Indigo over 100 years later. It was hearing Mozart's clarinet concerto which originally inspired DW to take up music in the form of the clarinet, and Mozart the music processor is therefore humbly dedicated to W.A.M. (Although if the tales are true he could write down the notes fast enough without it.)

DW later forsook polite society and took up the saxophone.

(Gentleman (n): someone who can play the saxophone, but refrains from doing so.) 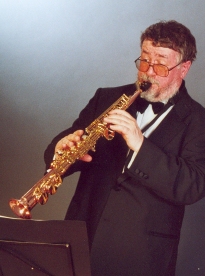 The author of Mozart and soprano sax "some years ago"

Since the late 1980s he has played alto and soprano saxophones in the North Cheshire Concert Band (a symphonic wind ensemble), in the Lymm Concert Band, in "the Sax Section" (a saxophone sextet), in the "Sovereign Saxophone Octet", and with Dr Jazz and the Cheshire Cats (a big band).  There's more information about some of these, including photographs, on the live music pages.

Mozart the Music Processor™ started life as a "simple" personal project to help with arranging. Because, strange to tell, apparently not everyone can read DW's musical handwriting - especially when the last few bars have been hastily scrawled out on the evening before the performance!

The author of Mozart (right!) and alto sax with Dr Jazz and the Cheshire Cats at the Royal Northern College of Music's International Wind Festival -  Nov. 2005.

However, as soon as Mozart's first prototype started dropping notes on to the printer page, a number of things immediately became apparent: that it is a very worthwhile and satisfying project; that it is capable of almost infinite extension; that this will take a bit of work; and, not least, that lots of other people would like to have it.

Just how many people would like to have it became satisfyingly clear following the first release over internet in November 1994. Many satisfied customers started saying Mozart is great, but wouldn't it be nice if it could also... and thereafter diverge into a plethora of exciting ideas for future development. Well the author is listening; Mozart version 1 was all his own work but, as soon as it was out, it became clear that everyone has different requirements in a music processor. Detailed current and future developments are being guided almost entirely by feedback from users.

Mozart is now no longer simply a personal project; it has become a professional occupation. But the overall philosophy and objectives are the same: Mozart is designed to be a fast, robust way to create and edit good quality printed music, at a price which anyone can afford. And first and foremost it is still a labour of love.